The McArthur Law Firm has filed a lawsuit against SMOK for trademark infringement and breach of contract on behalf of the owner of Alien Vape in federal court. The complaint names SMOK’s two China-based companies, along with 10 retailers and YouTube vape reviewer Rip Tripper, as defendants. Alien Vape alleges infringement of its registered trademarks in its distinctive “Alien Vape” name, which the Defendants are infringing by manufacturing and selling products under the names “Alien Kit” and “Baby Alien.” SMOK has already agreed that the Alien Kit is infringing Alien Vape’s trademarks and signed a settlement agreement in October 2016 contracting itself not to release any more Alien branded products and additionally to pay Alien Vape $15,000 per month for SMOK’s use of its the term “Alien” on its Alien Kit. However, SMOK has flagrantly ignored and breached its contract with Alien Vape by failing to pay it the monthly licensing fee and continuing to release new Alien branded products. A representative example of SMOK’s most recent infringing product and advertisement is shown below: 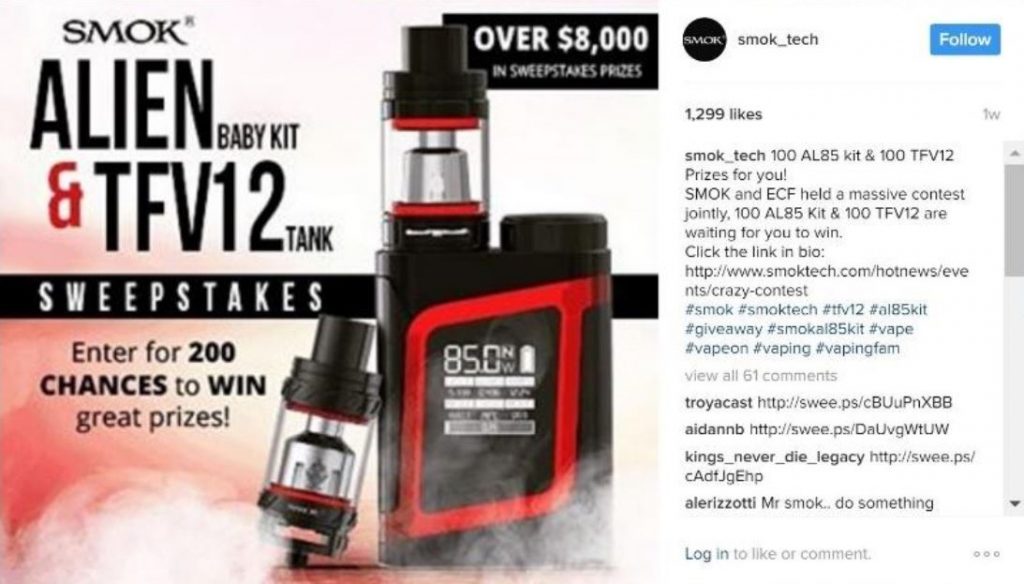 As outlined in the complaint, SMOK and the retailers are advertising their infringing product on their websites and social media. Due to its use of the “Alien” name, which SMOK has already agreed in the settlement agreement is infringing, Alien Vape has received numerous misdirected consumer complaints about SMOK’s products. Alien Vape is seeking a permanent injunction to stop the sale of SMOK’s Alien Kit products, as well as damages including the Defendants’ revenue and Alien Vape’s attorneys’ fees.