Earlier this year, a game developer named SCS Direct, Inc. launched a Kickstarter campaign for Humanity Hates Trump (“HHT”). Cards Against Humanity (“CAH”) then had HHT’s campaign removed entirely from Kickstarter allegedly because CAH claimed ownership to the aesthetics of black and white cards for fill-in-the-blank games. HHT has now sued CAH for bullying it off of Kickstarter with allegedly frivolous IP complaints.

The HHT game plays nearly identically to CAH. However, that is of course not the issue here since CAH’s gameplay mechanics are unoriginal and lifted directly from Apples to Apples. At launch, HHT bore some additional similarities to CAH:

Prodding from CAH’s attorneys led HHT to change the font and remove the tagline, but HHT drew the line at the complaint about its black and white cards.

Here is a screenshot taken from the Humanity Hates Trump game’s website of its own game:

They do indeed look a lot like CAH cards, but can CAH really protect the idea of black and white cards?

CAH’s legal theory here would presumably be that when consumers see black and white cards for this genre of fill-in-the-blank party game, they associate it solely with CAH. CAH would also need to show that there is a likelihood that consumers would be confused into thinking that HHT is created by, affiliated with, or sponsored by, CAH. Importantly, CAH’s argument would be strongly supported by the fact the HHT shares a dominant term in the game’s name that is not common to tabletop games generally: “HUMANITY”.

HHT’s crowdfunding efforts exceeded their funding goal, but that success was short lived. Kickstarter suspended its campaign after a cease and desist letter from CAH that allegedly relied on the similarity of the black and white cards (though it is important to note that we don’t know the specific content of that cease and desist letter).

Soon after HHT’s Kickstarter page was removed, HHT turned the tables on CAH and filed a lawsuit against CAH in Connecticut federal court. The complaint can be read here.

Fundamentally, HHT asserts that CAH had no basis for making its intellectual property complaint to Kickstarter. CAH allegedly has no registered or protectable trademark or trade dress over the look of black and white cards. HHT points to about nineteen other card games, some of which are obvious parodies of CAH, that feature the same design aesthetic (however, I will point out that none of them use the term “humanity”).

Additionally, HHT notes that the packaging of the two games is very different. Here is HHT’s packaging: 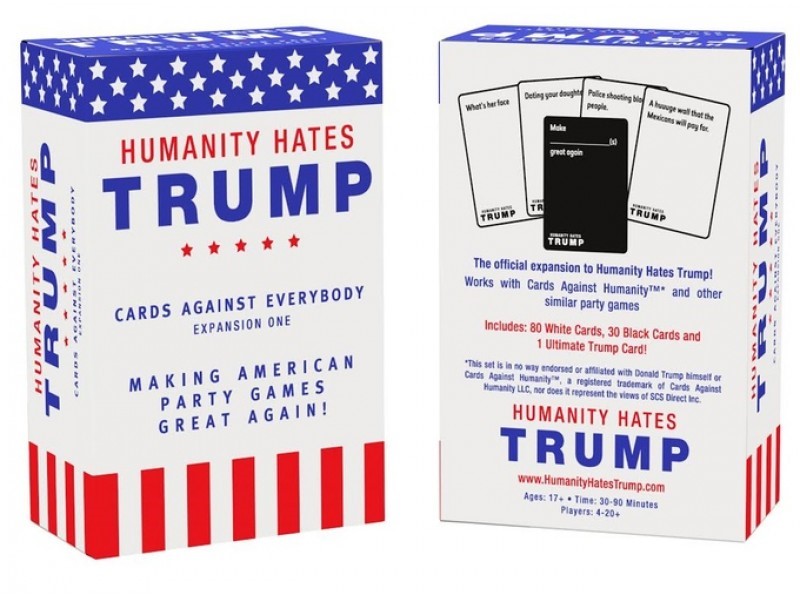 In its complaint, HHT is seeking a declaratory judgment from the court that it is not infringing on CAH’s intellectual property and for damages for “Tortious Interference with Business Expectancy” and for a violation of Connecticut’s “Unfair Business Practices” law that stems from CAH’s allegedly baseless intellectual property complaints that got HHT removed from Kickstarter.

CAH has not yet answered the claims and it is unclear if it has yet been served with the complaint.

This case demonstrates a number of important intellectual property issues in the games industry:

So, what do you think?

Should CAH own the concept of black and white cards for fill-in-the-blank party games that also use the word “Humanity” in their title? Or, did it go too far when it had HHT removed from Kickstarter, permanently damaging the indie developer’s bottom line? Does CAH lose some of its moral high ground when its entire rules set is lifted from Apples to Apples?

My take is that HHT went a little too far when it used both the term “humanity” and the general aesthetics of the CAH cards. Perhaps it should have chosen one or the other.

For assistance on these and other game development legal issues, contact The Video Game Lawyers for a consultation: www.thevideogamelawyers.com.